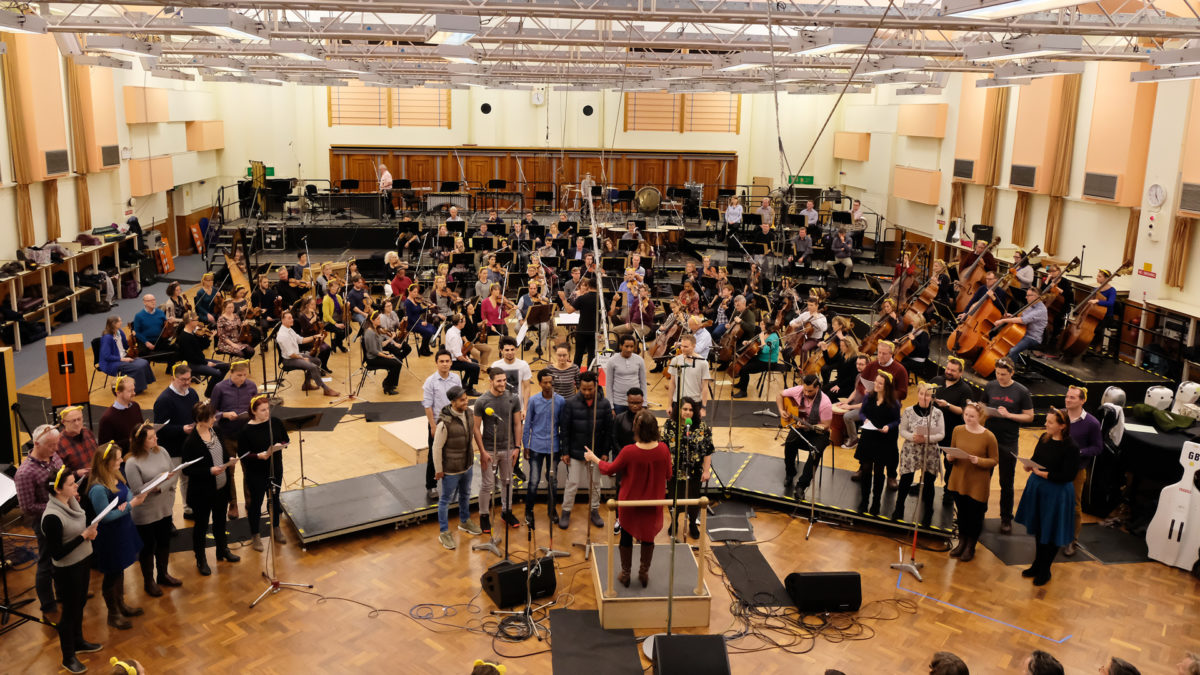 “Why are you fighting, Why are you angry, What is your problem, why do you hate me?”

Our Everyday People:LDN group of teenagers who have witnessed and escaped war in their home country, stood at the front of the BBC’s Maida Vale Studio, and led an amazing performance with the BBC Symphony Orchestra, and BBC Singers!

The stunning end result was recorded and broadcast on BBC Radio 3, for BBC Children in Need, conducted by Alpesh Chauhan and Merit Stephanos.  Music Action International was featured on four Radio 3 programmes in the lead up.

This unbelievable, beautiful and surreal moment was the perfect end to the amazing two weeks that went before. You can hear the full performance on Radio 3 here

With the crucial support of British Red Cross Young Refugee Service, the group came together in the autumn half-term week. Each young person overcame incredible odds to create  compelling, and complex new music.

For many, it was hard to keep up regular attendance through the week. Many appointments, including key Home Office interviews were concentrated within the half-term. Despite some young people only being able to attend as few as two sessions, the flow of new ideas and creativity was unstoppable. 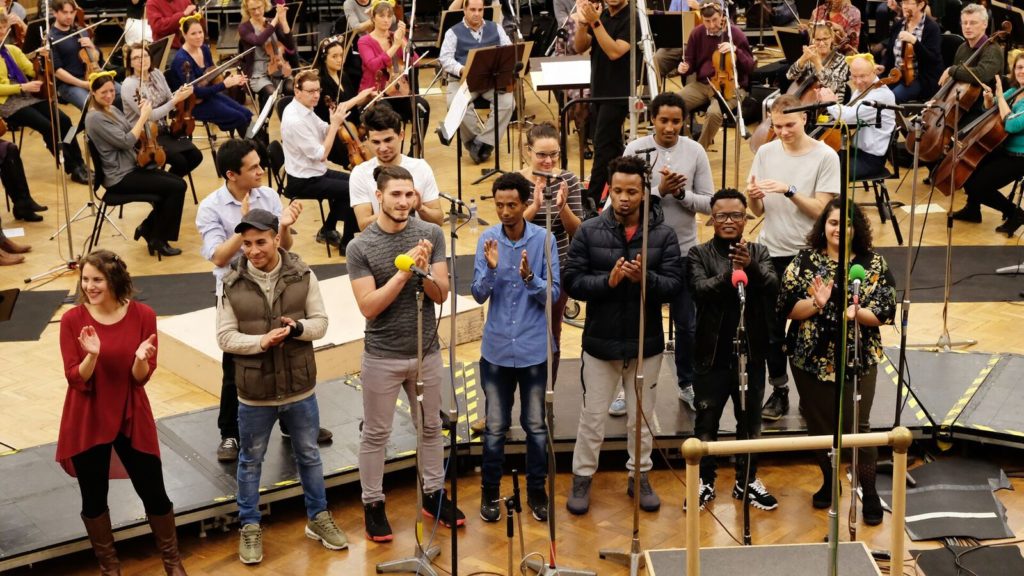 The themes of home and hopes for the future, provided the creative anchor for 5 new pieces.

The group premiered their new work at the St Mary’s Music Hall, Walthamstow, in a joint concert with the London Syrian Ensemble.  By the end, they had the crowd dancing in the aisles.  An incredible achievement.

And then there was their rendition of Sly and the Family Stone’s ‘Everyday People’.

The group has often drawn inspiration on the song’s original message of tolerance and acceptance of people of all backgrounds.  Their reworked version included their own take on this theme –

“Why are you fighting, Why are you angry, What is your problem, why do you hate me?”

Why divisions like race and religion, hunger and famine?

This is our vision – I am Everyday People!

The final line of this passage is translated into the mother tongues of each group member. Languages included Amharic (Ethiopia), Lingala (Congo), and Arabic (Syria).

Composer John Barber took this version away, and turned it into an Orchestral & Choral arrangement, specifically for the BBC collaboration.

When our staff walked into Maida Vale Studios, all were completely blown away. Not only by the orchestra and singers, but by how the group rose to the challenge of fronting a performance alongside over 100 professional musicians and singers.

The orchestra and singers took the unparalleled energy and joy the group create to an entirely new, unexpected level.

Huge thanks to Ember and Leila at the British Red Cross, Karen, Lizzie, Anna, and Naomi at the BBC, and our incredible team of facilitators Merit Ariane Stephanos, Ben and Sindy Czureja, Gerardo Juarez, Joe Steele, and Anna De Mutiis.

“We were so thrilled that Everyday People were able to take part – they brought so much joy with them and made everyone in the room so happy with their energy and amazing singing. I hope that having these things to listen to and look at help to remind the group of what an amazing thing they just did! It was such a pleasure working with them; they were so full of humour and fun. Working with Merit and the other leaders Ben, Sindy, Joe, Anna and Coby was a real highlight for me too – you guys are so inspiring, thank you so much for everything you did and do! It’s an experience I won’t forget. And I know all of us in the team and in the BBC Symphony Orchestra and BBC Singers will treasure the memories for a long time to come.”

To hear more about the impact of Everyday People, click here

Everyday People is funded by Children in Need and Youth Music