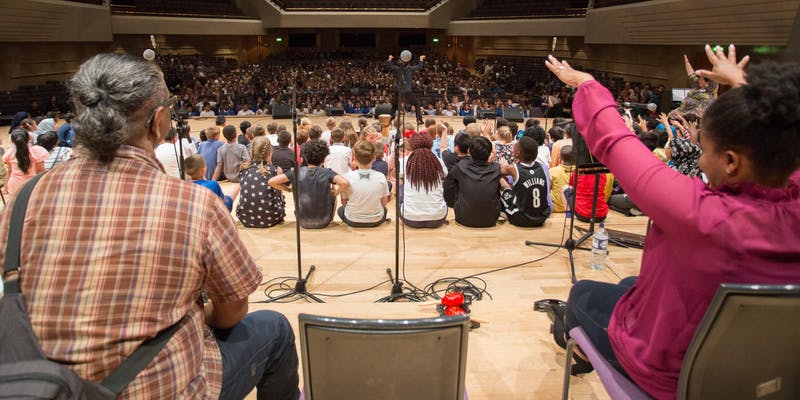 In the run-up to Refugee Week, we caught up with Mohammed Yahya, one of our inspiring music facilitators, to talk about our school programme Harmonise.

We work with musicians from Syria, Congo, Ethiopia, Romania, Iran, Bosnia-Hercegovina and more, who choose their favourite songs to teach the kids, as well as creating original music together. The kids can’t wait to perform on 21 June in London, and 24 June in Manchester for Refugee Week this year.

After escaping conflict or persecution, many refugee and asylum seeker children still feel isolated and misunderstood. We created Harmonise to inspire collaboration between refugees and children of all backgrounds.

Mohammed is an amazing hip hop musician who specialises in working with young people. He uses his own experience of war and displacement to help create empathy. He talked to us about the programme, why music is important and what music can teach us about culture and conflict.

Tell us a bit about yourself

Mohammed: I was born in Mozambique during the civil war which lasted sixteen years.

This war took place shortly after our independence from Portugal, so it should have been a time of celebration. But unfortunately, two political parties (Renamo & Frelimo) decided to fight for power and this led to over 2 million Mozambicans dying and over five million being displaced.

My parents, my two oldest sisters and I had to flee to Lisbon where I lived until I was ten years old before moving to London.

Growing up in Portugal I experienced a lot of racism and didn’t have access to Mozambican literature so the way that I often connected with my heritage was through music that my parents would play at home, from songs that addressed our customs to songs that informed us about the political situation.

Amongst many other things, my father was a singer back home and I can’t recall a day that my mother wouldn’t play music in my house, so it played a huge role in my life.

How does Harmonise compare with other school programmes?  Have you learned anything new from your experience on the programme?

M: I found working with Harmonise a great experience because it allowed me to apply my strengths whilst learning new techniques when delivering the session alongside other facilitators.

Through this process of sharing techniques with the other artists, I was able to learn new ice breaking exercises and different musical elements from other cultures to bring into my future sessions.

Why is Harmonise important?

M: I think Harmonise is very important because the work that we deliver has a positive impact on both the pupils and the facilitators.

I think one of the best things about Harmonise is that it brings together so many professional musicians from different countries and backgrounds in one class. This helps us create an amazing final performance at the end of the programme.

What change have you seen among children you’ve worked with?

M: In the beginning of the programme, I found children to have little confidence and self-belief but as the programme progressed they developed a great ability to artistically express themselves without holding back.

Why do you personally think music is a useful tool to use in the classroom?

M: Music is a great tool to use in the classroom because regardless of the language you speak, or where you came from everyone is welcomed and encouraged to take part, music breaks down barriers; it is a universal language that has the ability to bring people together.

Join us for some vibrant FREE performances at the Southbank Centre in London on 21st June @1pm and Bridgewater Hall in Manchester on 24th June @1pm celebrating creativity and humanity.