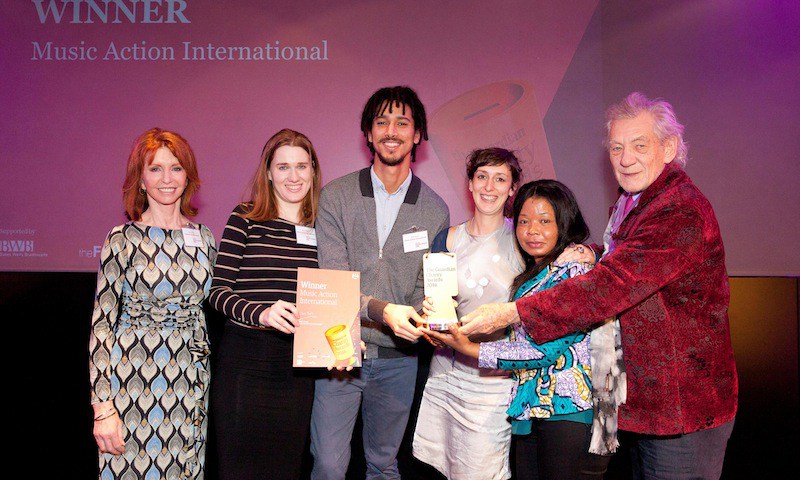 And the winner is…

We are so delighted to tell you that Music Action International are officially winners of the Guardian Charity Awards 2016.

The Awards offer a unique platform to celebrate the success of small and medium-sized charities working to improve social wellbeing. Of over 800 applications, Music Action International were chosen for the Award and attended a presentation ceremony in London with special guest Ian McKellan.

The judges, drawn from across the Third Sector and including Jane Asher, were inspired and impressed in equal measure by our ability to bring people together through music and break down negative stereotypes, while transforming lives blighted by war, torture and armed conflict.

They use the power of music in such a wonderful way that is so totally changing lives of people who have been through such horror, that one can only marvel at they they’ve achieved. We are absolutely thrilled to be giving one of the awards to Music Action International.

Speaking at the awards ceremony the actor and activist Ian McKellen said he was humbled by the winning charities’ work.

At a time when the protective arms of the state have become weaker, those of charities are even more important.

This award would not have been possible without our dedicated team, partners and supporters past and present who have shaped, developed and inspired our work since we began in 2010. It is a fantastic achievement for us all.

Find out why the judges chose MAI for this prestigious award: watch this beautiful short film made especially by the Guardian for Music Action International. You can read the full article online here.

We are delighted the Guardian has given our work such recognition. There is still so much more to do. To help increase the impact of our work transforming lives affected by war, torture and armed conflict, please Join the Movement