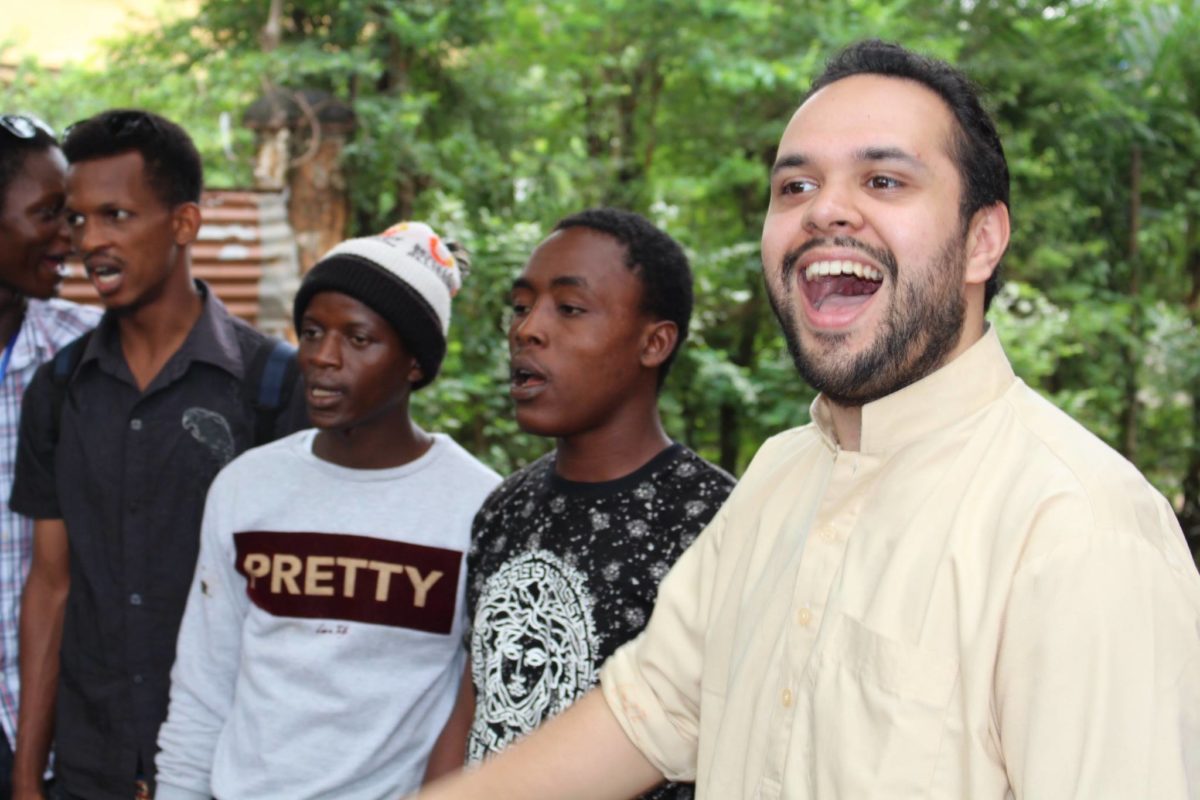 Our first visit to Sierra Leone with
WayOut Arts

Music Facilitators, Lis and Faz, headed to Sierra Leone to work in Freetown with the cities’ young people living on the street and/or affected by the recent conflict, including former child soldiers. In partnership with WAYout Arts, the team spent a week with local young people sharing music facilitation skills, song-writing ideas and creating a new choir with local people. Here Faz tells us about this first research trip:

Lis and I arrived to warm weather in Freetown where we were met with the big, warm smiles of WAYout staff Gibo and John. The next day we were taken to WAYout Arts space. We were met by some of the locals as well as members of the Black Street Family and we quickly realised that most of the participants were expecting a session at that moment, so we launched into a session of games, improvisation and activities to get to know each other.

We next met Hazel, the amazing woman who set up WAYout and spends most of her time there working with young people living on the street and other locals marginalised and affected by war, conflict and circumstance. A truly inspiring lady.

In the mornings we worked with a smaller group of 8 – 10 musicians to focus on the art of creative facilitation. We discussed how certain games help to bring energy levels up and how some are really effective in introducing a new group of participants to each other. We then collectively put what we learnt into practice during the afternoon sessions, which attracted around 25 participants each day, many of whom were new to music.

High levels of rhythmical ability were demonstrated and we focused the enthusiastic energy straight into the creation of original material. The sessions were very playful and brought the group closer so that mistakes and silliness were widely accepted from each other.

We continued in the mornings with sharing facilitation techniques and for all musicians to lead activities in the afternoons.  Approaching performance day, we started rehearsing with more creative decision making, with more practice from the groups. It was all coming together nicely and soon enough it was the day of the performance.

That morning, we all sat down and made sure we knew the order and structure of each song. We set off at 1pm from WAYout with the participants in a mini van singing their songs out of the window down the narrow backstreets of Freetown towards Ferry Junction, an area of Freetown a few miles from where we were based.

We saw the slums of Ferry Junction come into view as we followed the minivan in a taxi with Smart, a participant from the area. The tin huts were small and overcrowded and the ground was neither dusty soil nor wet mud but a reddish mixture of one blending to the other. Life is tough here. People make the best of what they have and amazingly manage to make the place feel homely.

Our first performance was a success with around 20 locals coming to see us and 30 children cheering for more! From here we traveled to the market where the energy suddenly erupted. A large crowd gathered for us and a local community leader translated in Krio an explanation of our songs to the crowd which was met with great applause.

More gathered to see what was going on: the music became a magnet for children, women, men and market owners in the immediate area. It was sweltering in the dusty market heat. We finished on a high and everyone was buzzing about it!

We returned home after a long and reflective journey back to WAYout. An amazing day and an amazing week topped off by such a memorable collaboration with WAYOut and Music Action International.