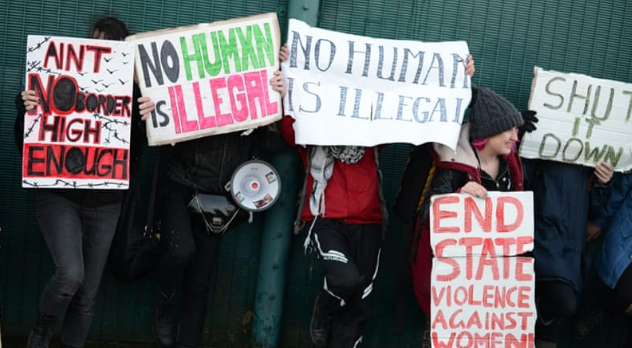 Usman Khalid from our Marketing team was placed in detention. Here he talks about the difficulties facing those applying for asylum, and how he turned a negative experience into a positive one.

I came to the UK from Pakistan in 2007. In 2015, the Home Office locked me in an immigration removal centre. A removal centre or more commonly known, Detention Centre which is basically a prison. But there are two big differences between a detention centre and a prison. Firstly, there is no time-limit given in detention and you can be in detention for as long as the home office feels. And secondly, people detained in these centres haven’t been convicted of any crime.

It was a terrifying and stressful experience despite being surrounded by dozens of other people. Even in the presence of all those guards and other detainees, I felt very alone and helpless as I didn’t know when I would be released, and my life was on hold.

Although, I feel lucky when I look back as I was released after around two months behind bars. I put my case together myself, gathered the evidence that the Home Office required to prove I needed to stay in the UK for my safety. I then applied for Asylum as I feared returning to my home country, where my religious beliefs would put my life in danger. Confronted with the reality of being deported, I put in an asylum claim and I was quickly accepted. It sounds straightforward now, but the whole process was filled with fear and uncertainty.

When I was released, A pair of uniformed guards walked me through towards the main entrance and exit. As I walked through, the other detainees, many of whom I had become friendly with congratulated me, reaching through, patting me on the back in solidarity.

But I could see in their eyes that while they were happy for me, they couldn’t help feeling envious and therefore ashamed. If they could have switched places with me, they would have, and I don’t blame them for that. Although the sense of relief of being released was very strong but I felt a quite physical guilt at the people I was leaving locked up behind the detention centre’s tall concrete walls. I remembered the hopelessness of indefinite detention all too well.

I knew that once I was free I needed to get my life back, So I set about finding myself a new life in the UK. My passion is marketing, so I tried to enrol at Birkbeck to study for a masters. But I couldn’t provide all the paperwork they asked for as some of it was still in Pakistan and I couldn’t return home to collect it. After a long back and forth with the admissions office who weren’t used to dealing with people like me who have to leave their life’s paperwork behind they agreed that by circumstances were extenuating and I was admitted onto the course.

Another passion of mine is nature, so I organise nature walks for friends and colleagues; in April last year a small group of us did the five-hour walk from Chesham to St Albans in the sun. Walking in the fresh air looking at plants and the landscape is a great pleasure for me, a reminder of my freedom.

Currently I am working with Music Action International in Marketing & Communications along with developing my own coffee social enterprise with a social mission of supporting other refugees. I also whenever get a chance, give talks at schools, community centres and occasionally in Parliament, I feel proud to act as an example of what the whole country can gain by giving people, wherever they come from, a chance to live in dignity and contribute their skills and experience to their community.

When I was detained, I couldn’t contribute anything to society and as a person I couldn’t grow. I had dreams, skills and aspirations but I couldn’t do anything about them. When I go around the country now, volunteering and working for my causes, I try to remember the people who are still locked up and still have their lives on hold – and I hope that one day, we’ll be able to talk about them and their lives after detention too.

So many of our participants who have fled war and survived adverse conditions find that when they come to the UK, the struggle is far from over. Stone Flowers, our torture survivor collective, wrote a song called ‘Battle for Asylum’ as a poignant statement about how after being tortured in their home countries, they now find themselves subject to psychological torture in this country. The threat of indefinite detention is one of these tortures.

Arbitrary detention should end in the UK. Please campaign with Detention Action.

Think Clicktavism doesn’t work? We’ll be looking at whether your click has any impact on the rest of the world.