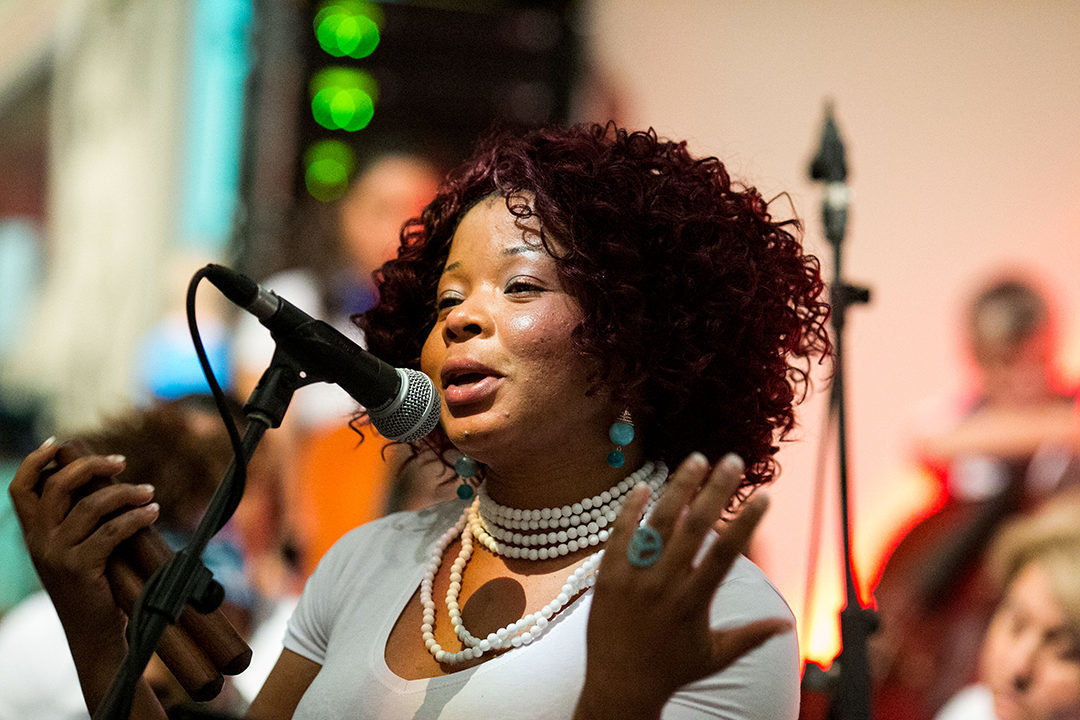 Emmanuela’s Journey: a story from the
DRC to Music Action International

Emmanuela Yogolelo is an incredible musician, leader and teacher, and the journey that has lead her to Stone Flowers is an inspiring one. She is now one of the groups core music facilitators and her journey from the DRC to MwB involves war, escape, asylum seeking and music. Messages like hers are so important to share but so extremely traumatic for the people trying to share them. Stone Flowers provides a haven where these messages are made easier to tell through music. Their new album provides the opportunity to share these stories as well as providing rehabilitation for those who are now able to share them.

10 years ago, Emmanuela came to the UK to seek asylum after her home country, the Democratic Republic of Congo, became too dangerous to live in. She recalls how the freedom to plan one’s future was lost as the country gradually became further divided. Emmanuela describes how she became a refugee in her own country as they were transported from area to area where they experienced the danger of war first hand. The only way to find safety was to leave. And that is exactly what she did.

Unable to say goodbye to her family, Emmanuela paid an unknown man to transport her out of the country. As she boarded a plane for the UK she was not worried about what was to come, only relieved to have finally escaped. However, upon arriving in England, the task of being granted asylum in this country was not easy; it took 9 years.

After the first 6 months of being in the UK and her request for asylum was denied, Emmanuela was taken in by a priest who offered her accommodation and by chance, ran a choir. Emmanuela tells us that through music, she was able to connect to people. Music became very therapeutic and provided a way to meet and interact with other refugees experiencing the same struggles. This offered Emmanuela hope and comfort because before now, she had felt like she was going through this alone.

Emmanuela had not been in contact with her family since she left DRC. She describes the complications of getting in touch due to not having an address, e-mail or phone number which could guarantee communication. This means that Emmanuela does not know if her parents are alive or dead. When speaking about this, she is incredibly strong and describes how you can not dwell on this because it does become too much. However, last Summer Emmanuela’s sister came to Europe where she was able to make contact with Emmanuela. When they were reunited, Emmanuela describes how she was ‘crying with happiness’.

Emmanuela’s story is testimony to the therapeutic powers that music holds for people going through such hardships. This story is one of many which emphasises the importance of the work done in Stone Flowers and how this new album will be a showcase of not only musical, but social and personal achievement against all the odds.

Stone Flowers are currently fundraising to make this album happen. They are halfway there but need your help to reach their final goal of £7000. Pledge NOW to make this dream a reality.  Follow us on Facebook and Twitter for more updates on the campaign using #StoneFlowers.