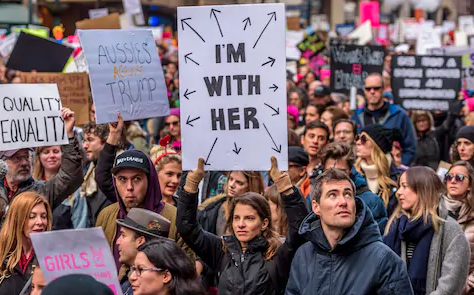 It’s not hard to think of examples of inspiring movements for social change in history. From suffragettes to the civil rights movement, all activists have one thing in common: A drive to change the world we live in.

These days, most major movements have been boosted by the Internet. Campaigns such as #MeToo, #TimesUp and #BlackLivesMatter have been used by activists to put pressure on powerful organisations and governments in order to influence legislation. But the question remains…is online activism really as effective as offline activism?

Because of social media, now anyone can be an activist. You may have heard phrases like ‘armchair activist,’ ‘slacktivism’ and ‘clicktivism’ to describe this phenomenon. On social media you can now raise awareness by changing your profile picture, sharing videos and following charities you care about. You can even start a fundraiser on Facebook for your birthday. Sometimes, this kind of activism can feel like it’s designed more for people to show off to their friends rather than actually doing something meaningful. Can this kind of contribution be any deeper than a click?

It allows anonymity, which means people who may be marginalised or persecuted against for speaking out can also make sure their voice is heard.

However, Studies show that many people who ‘like’ a charity on Facebook, may not follow up this gesture with a donation. In fact, many people feel less compelled to action if they see that a charity has a large follower-base as they assume that other people will get involved. The 2010 Save Darfur campaign is a perfect example of this. When the Facebook page was created, it was one of the largest campaigns on the platform, with over one million members. However, in terms of fundraising, only a fraction of these members were donating or actively getting involved in raising awareness of the campaign. But that’s not to say that online campaigning is ineffective.

In fact, the alt-right have been able to utilise social media and online activism very effectively. In September last year, a targeted online campaign by far-right activists was successful in pressuring mainstream European parties into dropping support for a UN migration pact that was years in the making. Through a burst of activity including tweets, Youtube videos and Facebook posts, a relatively small number of anti-Islam and neo-nazi sympathisers were able to push extreme views into the mainstream. As a result, a previously uncontroversial piece of legislation that would have helped people fleeing conflict was shelved.

Online activity is now swiftly becoming influential in political reality. Many people have a larger network than they realise, and by sharing posts frequently they could be helping prompt someone to begin their own campaigning. Not only this, but signing a petition about a cause can even lead to the issues being debated in parliament, the first step in creating meaningful change. Some may argue that online petitions are mostly ignored by politicians, such as the petition to ban Trump from the UK, but whilst the petition was unsuccessful, it sent a powerful message to Trump about UK sentiment towards his divisive politics. Elsewhere, petitions have been successful in banning eggs from caged hens in UK supermarkets, abolishing the tampon tax, and forcing EU parliament to be transparent about lobbying.

To create real, meaningful change, online activity must be matched with offline activity as well. Getting actively involved with a cause you care about means that any online activity is harder to ignore by those in power. As with #MeToo and the global women’s marches and the #Stansted15 online and offline campaigns, combining social media action with protest sends a powerful message that cannot be ignored.

At Music Action International, we’ll be highlighting news, campaigns and other ways we can all make a change with people whose lives have been devastated by war, torture and armed conflict. We would love you to get involved through clicks that matter. Sign up to get involved

“It often feels to me that the group has a power and personality of its own and a power to help with the healing process.”